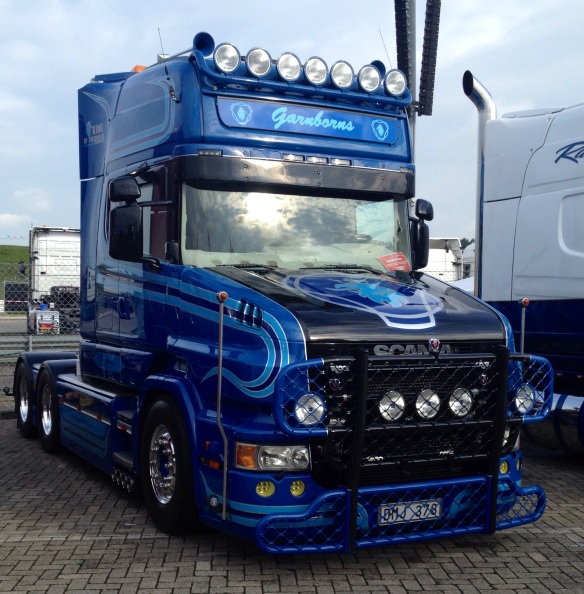 For me this is the best truck I have seen in 2014. It might not be the newest, it might not be most practical for most of Europe and it certainly won’t be everyones taste but for me, spot on.

If you live in the UK and haven’t been to one I strongly advise that you make 2015 your first trip to a European truck show, the standard of trucks is amazing. I can’t deny that the trucks here in the UK are getting better and better but the Europeans just seem to have it right, they all look good. To me the best trucks have always been out of reach of what I could afford or achieve and the T560 is no different. We all joke about winning the lottery but a Tcab would be very close to the top of my list. It’s blue, it’s got two sets of pipes, it’s got a subtle custom interior and enough lights to make it look good but not over the top. As with anything I would make a few subtle changes as I’d want to put my mark on it. 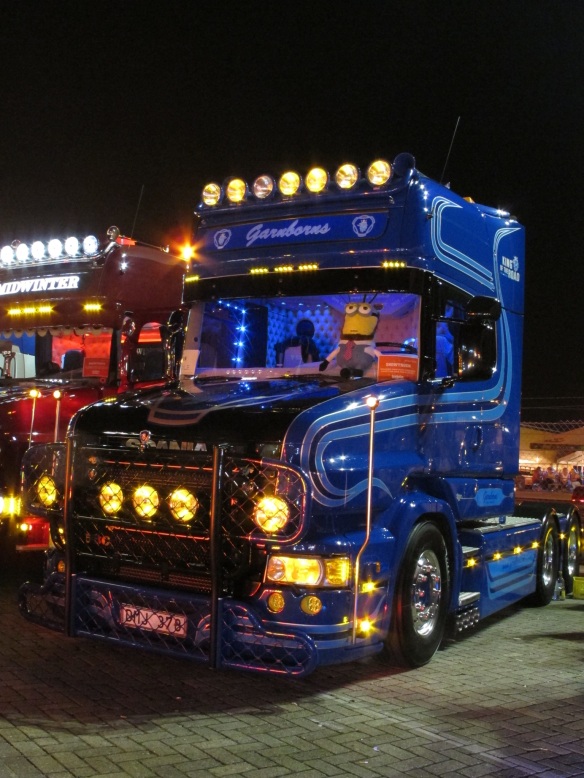 2014 has seen a big rise in the blogs popularity through all mediums, the Facebook page, twitter and the good old fashioned http://www.truckblog.co.uk website. I’m not going to link to any of those this time round as I’m sure you all could do with a break from the ruthless links and plugs for the blog. I have no idea where the blog will be in another 12 months, hopefully you’ll all still send me stuff, photos, info and the odd piece of trucking memorabilia to decorate TBHQ and I’ll keep bugging the TV companies in the vague hope they’ll see that we need Truckblog TV!

Hopefully I’ll be visiting, Truckfest Peterborough, Crowfield Truck Rally, Gathering of the Griffin, Retro Truck Show at Gaydon, more than likely (and hopefully) Truckstar Festival at Assen as my foreign trip, although I have heard on the grapevine that there is quite a convoy of English motors heading to the International Trucker & Country Show held at Interlaken, CH. I have always wanted to go James?? Finally if the offer is still there then I might just make it to Belfast too.

Anyway thank you for following and thank you for making the blog what it is, without your contributions I’m sure you’d all be bored silly of 143’s, MAN TGL LX’s and Mercedes-Benz photos! As we all do secretly say now and again Keep on Trucking! 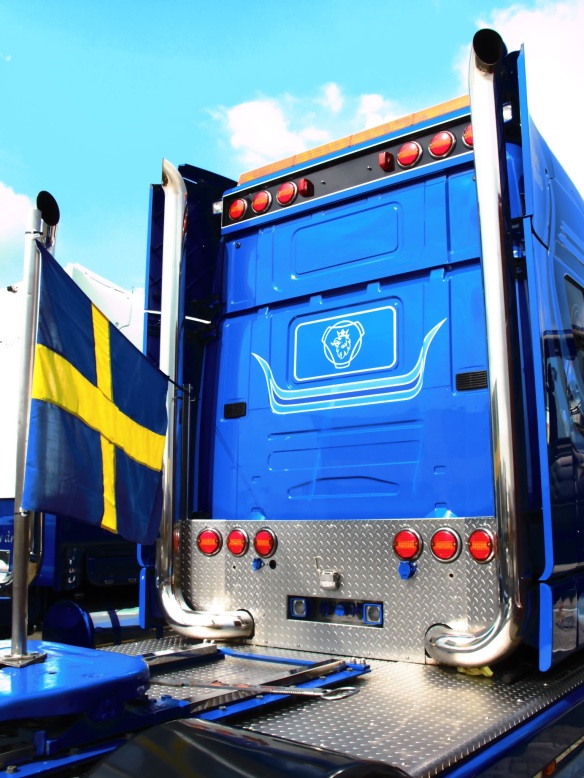 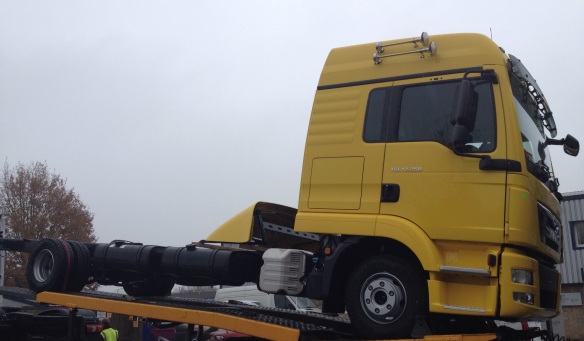 Truck detective required!! This was on a transporter I saw today. It’s an MAN TGL LX 12.250, it had a roof spoiler, factory air horns, twin long range fuel END_OF_DOCUMENT_TOKEN_TO_BE_REPLACED

This is another one for the mini artic and drawbar lovers among you. I’ve been meaning to put it on for a while now, but one evening while bored I was using the Google Street View and heading down the motorway towards Brno in the Czech repulic and I couldn’t help but notice just how many mini artics or mini drawbars there were. I know the Eastern Europeans are big fans of these mini combo’s, but there seemed to be one every few miles!

I also came across this slight Street View anomaly. I’m 99.9% sure that this is the same truck on the same day, but it is pictured at 2 different places on the motorway. Strange but true!……I can’t believe your falling asleep on me…

Still nothing in particular to update you with, no photo’s any way, but….. a couple of our drivers we’re heading for Bremen and that sort of area last week. In my wisdom I mentioned it to the drivers and after the usual barrage for abuse for being such a sad-o, one driver said have you looked on Google Street View around the Airbus factory’s in Bremen………….. of course I hadn’t!! I popped onto the interweb and plonked the Street View man on a road right out side the one of the factories and low and behold an Activ spot!! A nice ageing Mercedes 814.

So there we were talking in the office, the kind of late afternoon office banter that goes on, when you realise its nearly home time but not quite and you have lost the will to live……… the big boss man pipes up and says he followed a Google Street View car on his way home the other night. So we carried on chatting and i ended up searching the net to see what i could find out about being a Street View car driver. Easily distracted by any thing truck (hence the worldwide popularity of the blog!!) i came across a set of map coordinates and a title of  “Big Load on Flat Bed Truck”, how could i resist.
So i enter the world of Street View and look for a flatbed of some sort. Looking around i see this below, nice. A tidy International with a flat bed, an empty flat bed!

Still looks good as she passes further, but still an empty trailer, so where is the Big Load??……..

Trailer looks tidy yes, nice spread axle you cant disagree, but where o where is that Big Load???……… Hang on a minute there is some thing on that there trailer on a bridge in New Orleans on the I10 east bound (and down, la, la, la)…….

HA HA some one some where has a sense of humour! “Big Load on Flat Bed Truck”, yea looks massive at least it’s provided us with some entertainment for 5 minutes, although that is 5 minutes of your life you wont get back……

Any way as i was on the bridge, i thought I’d see what our loaded flatbed was following. A mean looking Freightliner pulling concrete pipes. I like the short stacks, i think that’s what gives it the look! I should have put a pic of the pipe lashings instead. The lashings consist of 2 wire ropes running from the front of the trailer to the back, yea length ways. As long as he isn’t heading to Germany he vill be fine Ja!

Now the other day i was out for a drive, cruising down the i80 in Nevada…… After a few comments of previous pictures here are a few more Google Street View shots from the dusty highway. I think its fair to say the Volvo VN’s are becoming very popular in the states. You can understand why, as most drivers in the US openly admit that European trucks are better built and have better ride and finish, but they wont have them because they don’t have the long bonnet. But since Volvo solved that little problem and started building the VN series back in 2002, there has been no stopping them. I think i am right in saying they are now top of the sales charts for the US. Have a look at this little selection (of mainly Volvo’s).

Just look at the long long road with the backdrop of the Nevada desert, not quite the same as the M6 now is it! This Gold Freightliner makes for a nice but modern change, a popular truck with the fleets as i imagine its a little cheaper but still is a good truck for operators and drivers alike. Note the white wheels, definitely a fleet truck! Smart none the less.

These final 2 trucks are both Freightliner and Volvo, owned by Interstate Distribution Company based in Tacoma, Washington State. I think you’ll agree that both trucks look smart, but the Volvo is slightly better or is that just my European bias coming into play?? Just look at that scenery!

That’s about that for this one, but if you have any comments please leave them below or email me at; ben@truckblog.co.uk ……..Untill the next Interstate cruise…………..

What a life the long distance lorry driver has. Deliver Saturday 20km from Limassol then you have to wait til 1600hrs Tuesday for the boat back to Greece. Lovely, what would you do with your self getting paid in Cyprus for the best part of 3 days. I think i’d park up for the weekend some where, then perhaps tout for some local jobs on Monday!! Just in case anyone knows there is a 6 wheel rigid of HC Wilson in Cyprus untill Tuesday afternoon.

For some reason my email @truckblog.co.uk isn’t working and i’m struggling to work out why. So for now if you have stories, pictures or any thing else you want to share  please email me at:-   truckblog@hotmail.co.uk hopefully then i will be able to share your stuff. If you have ried emailing the truckblog.co.uk address recently please resend to the new truckblog@hotmail.co.uk address.

The little MAN of www.stevemarshexpress.co.uk fame has been out in Sweden this week. Parked in a little rest stop just north of Lagan on the E4, so i though i’d look on street view to see just how beautifull the Swedish countryside is, only to find this beauty stopped for a breather.

I think i am being sent a secret message by the MAN man! It seems all roads at the moment lead to a little fella some where in Europe. I was trying to work out the shortest route to Hassleholm, Sweden from Esbjerg. Seeing as it is unlikely at the moment i’ll ever get to drive in Denmark, again i thought i’d enjoy the delights of Google Street View and see what it’d be like to drive across the sea between the Danish Islands. I place myself on the map and Bingo!! All the miles of road over the sea and i land 8ft from the front of another little Ger-MAN. I’m going to have to start a fan club for them or some thing! The boss keeps on about the company getting a new 7.5 Tonner tilt so we can have a flat or a little covered beast, this is my solution, GW you know it makes sense!