Edwin Richard Foden must have been a true British gent with a love of engines and eye for the finer things in mechanics and engineering. Afterall in 1881 the Foden family built there first steam engine but by 1898 Edwin had designed and built the first steam wagon that ran on very early single steel wheels the ore cursor to modern trucks as we know them. These days whether you love them or you hate them I’m convinced everyone one of us in the UK has a connection to an ERF for some reason.

“Hello my name is Ben and I’m a member of ERF’s Anonymous.”

Go on tell me, on the quiet if you wish, we’re all friends here. I was brought up on ANC Parcels ERF E10 night trunks. The first trucks I drove as a young’un and they had the brilliant Eaton Twin Splitter!  Then my dad worked for a local company, Courtenhams, for a short time and I did night time deliveries (even on school nights!) with him in varying different vehicles of the all ERF fleet.

With the advent of retro truck shows and social media where people post various things up for sale or we can follow trips and runs each of you are doing. I have noticed recently that nearly all of you have had an ERF moment at some time. I’ve seen some Cummins videos online in a Land Rover and the noise instantly makes me think of an ERF. I’ve seen some for sale with the big Hummin Cummins and 525hp on tap. I’ve seen someone has bought a LHD 4×2 one back from Spain and is now using it on long haul trips from the UK out across Europe. I still see ex Spanish ones up for sale and I have to say they are getting more and more appealing! Can anyone tell me why?? I can only deduce that the simplistic, pre computerised, Cummins humming, British built old boy of the road just has English-appeal. Not sex appeal, English-appeal. Ok they can be a little shy of a hill but I’ll struggle to believe anyone who says they have neither a closet-love of the Cheshire beast or have never had to drive one for work whether they wanted to or not. Just look at the green beast above (not my photo but thanks to the taker. Carl Jones??). What isn’t there to like? Big lightweight cab, tag axle, 525hp Cummins, aftermarket exhausts, Built in Britain. If not the green ECX how about the black beauty below? Big lightweight cab, tag axle, 525hp Cummins, aftermarket exhausts, Built in Britain. 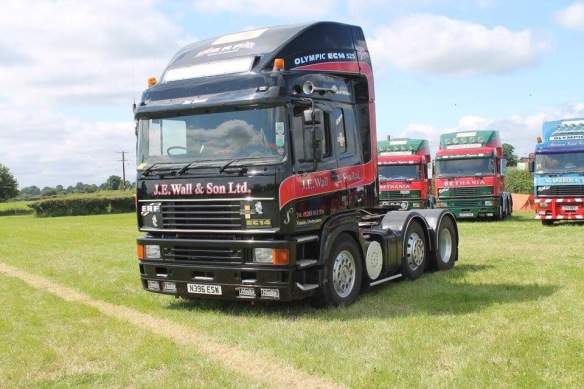