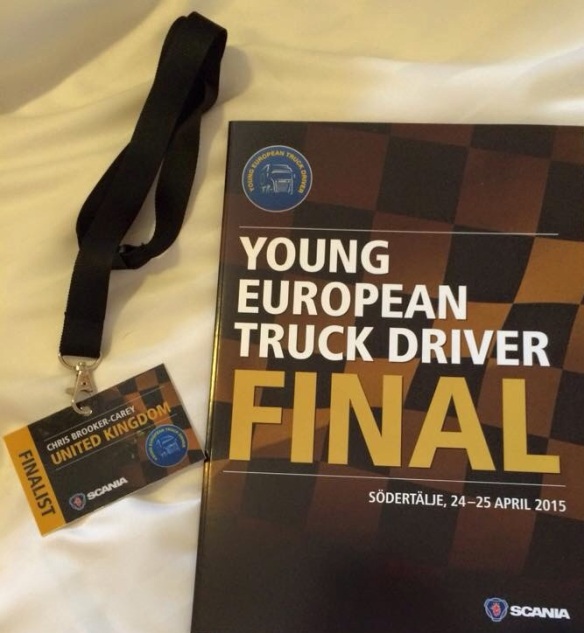 Have a think for a minute, what do you think the standard is for being called a professional truck driver? Accident free driving maybe? keeping your truck the shiniest in the yard? Or just turning up on time? Well after last weekend, I have a much better idea of the standard of Europe’s best young truck drivers and I am proud to say that I am one of them. 20,000 applicants from around Europe and Russia were whittled down to 26 via national heats and finals in a competition organised by Scania globally, with other competitions being held in Brazil, South Africa, China and Australia. 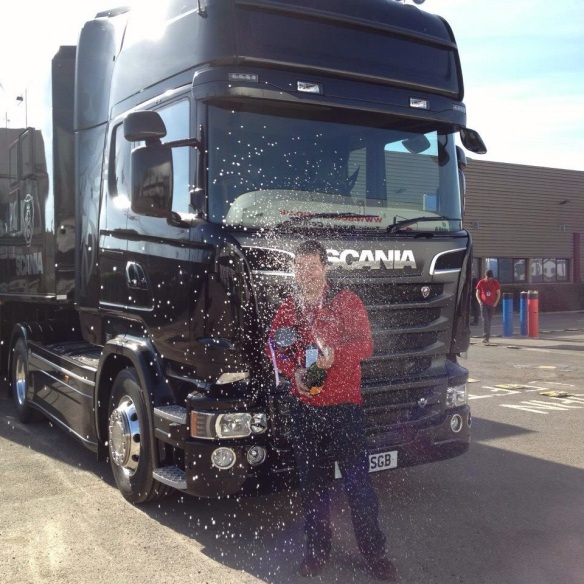 As you might have read elsewhere, I managed to qualify as the United Kingdom’s finalist after a day of tests at Scania HQ in Milton Keynes, managing to squeeze in front of 7 other finalists from England, Scotland and Northern Ireland. I had come 5th in the same competition in 2012 and had been determined to do better this time, but it was a great feeling to qualify for the trip to Sweden with the 2nd and 3rd placed guys coming along for the experience. I had roughly a month between the two events and aided by Scania’s Driver Development Manager Mark Agnew from Preston Scania and 2012 UK finalist Gareth Thomas, we pieced together what tasks would be set in Sweden. 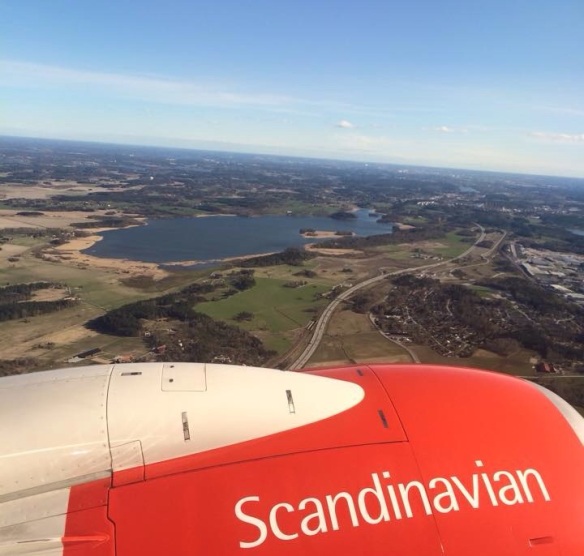 A flight down to Heathrow on Wednesday night, I then met the UK team at Terminal 5 early on Thursday morning to catch the 0730 flight to Stockholm Arlanda Airport, everybody was bleary eyed, but excited for the weekend ahead. The competition is run simultaneously with the Scania factory open day on the Saturday, with the 1st qualification stages taking place behind closed doors at the Scania Demo Centre in Sodertalje on Friday, and the open day on Saturday with 6500 visitors (eek!) The OPPET HUS (Open House) event is worth the flight in itself, with factory tours, Svempa custom trucks, classic Vabis vehicles, Scania truck simulator, RC trucks, and plenty to do for the kids too!!! 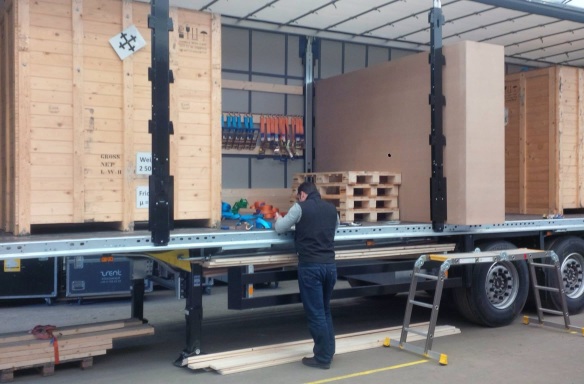 The qualification round consisted of Defensive Eco driving, Drugs and Drowsiness, Cargo Securing, Checks before driving and First Aid, leaving the last qualifying round for Saturday morning, with everybody doing the “Combo” exercise in front of the main stage at the Scania factory. The event is run like clockwork, with briefings, technical meeting, jury members, Scania crew members ensuring fair play and that you are on time for each event. Whilst I was confined to a green room between events, Ryan and Dave (the runners up) and the other Scania UK guests were flying round the demo track in an assortment of Scania trucks and and Scania powered machinery, an experience that is not available to the general public and is a once in a lifetime experience in itself.

The mood in the green room was tense, but there was a great sense of family between the drivers, we are all the same type of people in this industry, and this was evident in the conversations that were had, despite a few language barriers! After the end of the 1st day I reflected on how I had done, and was slightly disappointed in a few areas, but Mark and I both thought we had done enough to stay in the top 18 and progress to the elimination event. That evening we attended a dinner where the contestant placing would be announced as the middle 9, bottom 8 and top 9, but without a specific placing. Each country cheered when the groups were announced, with a chorus of the French national anthem holding up proceedings. Team UK were almost dancing on the tables when we realised that we were positioned in the top 9, I just sat there in shock as we were handed our individual scores. The night ended early for me, with most of the team hitting the hotel bar to celebrate our progress so far. The fun ended at about 3am when an employee of Schmitz Cargobull had managed to drink enough of the 5.2% Falcon Export to win the informal drinking competition!
The final day started with another technical meeting and a walk of the 1st manoeuvring course “Combo” after which the final rankings would be revealed. I completed the Combo with only one (controversial) penalty point and we were all ushered out to the stage to get the results in front of the assembled crowd which now numbered 2000-3000 people. Patrick (DE) was announced in 1st place and I was hoping to have stayed in the top 9, then I was announced in 2nd place and the UK supporters were jumping and screaming, waving flags and blowing air horns. WOW, I was shocked to have come so high on my first visit to the finals, especially as many of the other finalists had competed here before and the Swedish finalist had even won it in 2010. I was even more amazed when Mark pointed out that the disputed penalty point meant that I would have been in 1st position if I had done the clear round that I thought I had.

Two elimination rounds left before the final, Fire and Rescue and Knock the King. I chose to compete against the Romanian driver Ionut in Fire and Rescue, which is a new event for ScaniaYETD so there was a touch of confusion on how it needed to be completed, with it being a multi-part exercise based upon coming across an accident scene and putting out a fire before completing a slalom in reverse and popping a balloon. A photo finish between us meant the judges had to replay the live video feed on split screen. Only a fraction of a second between us, I was awarded the win and progressed to the next round of knock the king, where 3 drivers compete simultaneously with only one winner going through. As the higher placed competitor, I drew out who I was competing against which was Robert from Ireland and Thomas from Switzerland.
Sadly for me, Thomas ran out as the winner in our heat. 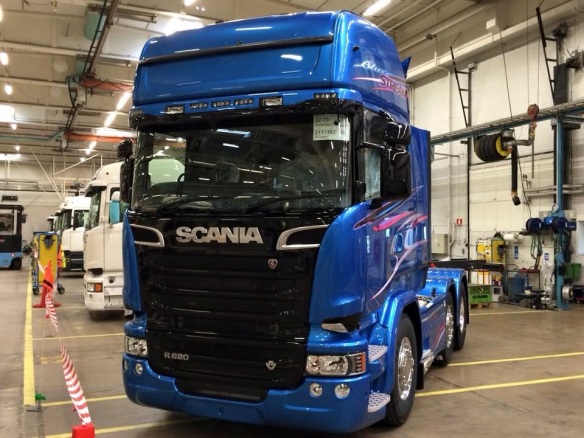 So the adventure was over but the grin on my face was a mile wide. I was so happy to have had the opportunity to compete, the downside of getting so far was that I had little time left to visit the open house events, but I managed to get some pictures and and a sneak peak at a RHD Bluestream that is heading to Ireland.
I hope you enjoy the pictures and my ramblings, but if you are under 34 now, you need to enter the next competition in 2017 and try to get on that plane to Stockholm, as it is a true money can’t buy experience. 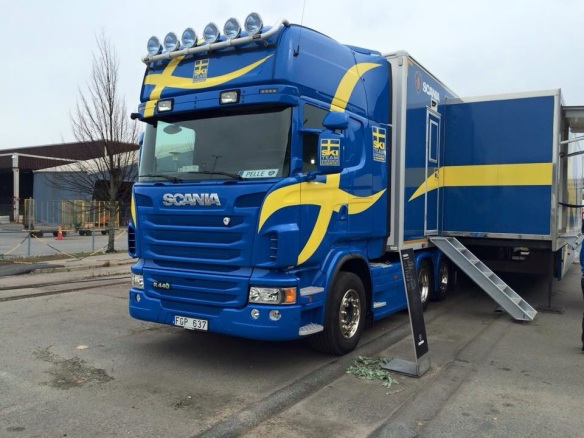 1 thought on “Skilful in Sweden by Chris Brooker-Carey”