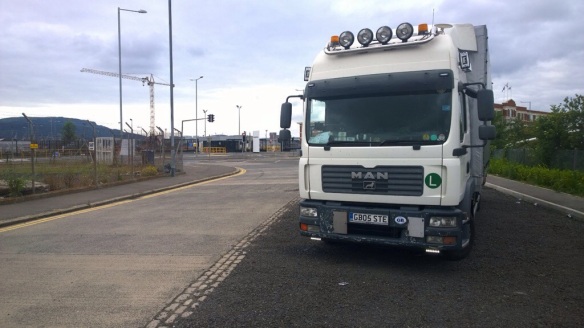 What were you upto yesterday? Nice day at home with the family? Sunday afternoon BBQ? Trip to church to have tea with the vicar? No not our MAN and pilot Steve Marsh. The majority of us were taking it steady and quite a few of you were still sleeping after a heavy night at various truck shows around the country when Marshy was already down in Birmingham loading Aircraft parts for same day delivery to Belfast. A crate over 5 metres in length required Marshy’s talents although being aircraft parts weight wasn’t an issue. Anyway the nature of express is express so Marshy was drafted in and of course the tight time scales were met dispite the best efforts of the Cairnryan sniffer dog!

“Bloomin drugs dog in Cairnryan… They asked did I mind it in the cab, I said I’d rather not… They put it in anyway. Done my delivery and back at the boat thinking its a bit warm in Belfast… Came back to my truck after a cheeky wazz and thought which nobhead had got the nightheater on. Turns out I’m the nob coz the bloody dogs trod on all my switches and turned IT on and the my frigo off…. It didn’t find anything but had a good rummage through my bin and scattered what it didn’t lick…. Woof!! 🐶”

The dog might have nicked his Hovis and tried its best to over heat him but no matter what the job is, Steve Marsh Express gets the job done……..yes that is a shameless cheesy plug!