Here he is again, our man Mat or as he is now known at work and at home, the Russian specialist. Since we last heard from Mat at the beginning of November he has managed to slip in another trip to Mockba just to finish the year off. Such is the mad world of showbiz, Mat was off to do two dates for one of the UK’s biggest pop/rock stars and a performer that is well known world wide. I guess with such a celebrity at the top of the tree there is the purse available to fund such a trip. This time Mat loaded half a load in London then out to Switzerland to load the second half. Having loaded he travelled up to Hamburg for the first of two performances. From the Hamburg arena it was over to Hamburg airport where Mats load was flown out to a gig in Libya. While that was going on Mat had to hot foot it up to Moscow (empty) to meet the plane to reload and take the equipment on to a venue and Mats final venue of the year in Moscow. As they say their in no business like show-business!!

After the Moscow gig all there was for Mat to do before he could finish for the year was to run back. Oh yea, run back from Moscow to London via Switzerland. All in a few days work for Mat and in all honesty as we could all predict the only difficulties with the weather and conditions was once he was back here in the UK. In fact the mud on the trailer was mostly from a visit to J26 Truckstop on the M25 on the way home to Suffolk. It is fair to say that Mat is beginning to make this international lorry driving game look some what easy. Russia is but a motorway trip away for those with know how and those who aren’t phased by bad drivers, poor roads, bandits and winter weather. Perhaps as Transam Trucking use Mat for most Russian trips and also as Mat has made Moscow a regular run this year, has led to Mat getting his second Russian number plate in his windscreen. What I want you all to tell me is what the number plate says. Please leave your answers in the comments box. Here it is…..

In fact those of you who leave the best suggestions will be in the running for a TB sticker! So that’s it now for Mat until the new year, where he starts at the end of January on a UK tour for a comic Druid! As is the way with real drivers, those who love the job, Mats eyes lit up when he told me the longest leg of the tour is a run from Glasgow to Truro. As we both agreed, unless you are a fish truck or ex Brian Harris driver, there aren’t many who have done this particular route. I for one look forward to more trips and tales around Europe and beyond in the big black DAF next year. I think Mat said he had visited 24 countries this year. This includes Russia, Ukraine, Belarus, all of Scandinavia and of course Western Europe, bring on 2018 is what I say! 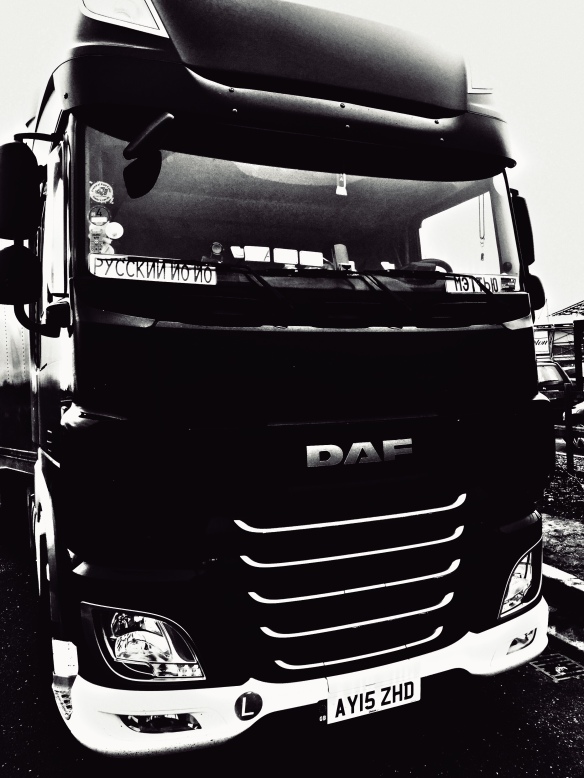