Volvo Trucks marketing have done it again!! A super bit of Swedish marketing along with the one of the best drivers in the UK, Mr Tiff Needell. This time Tiff is taking an FH 540 around a Swedish race track and having rather a lot of fun in the process. The only thing about the video is that lucky Tiff gets to drive the big Volvo in a derestricted state, something that all (most!?) drivers can only dream about these days. Have a little read of the press release below. The idea behind the crazy Needell-ness is to promote Volvo truck’s new dual clutch gearbox, it does look very smooth!!

An eight-tonne Volvo FH against one of the world’s fastest cars – a Koenigsegg One:1. This is the scenario in Volvo’s new YouTube film, ‘Volvo Trucks v Koenigsegg’. The aim is to put the new I-Shift Dual Clutch gearbox – based on a technique used in sports cars – to the ultimate test.

In the film a Volvo FH comes up against a Koenigsegg One:1, with as much horsepower as weight kilos (1360), making it the world’s first mega-car. In order to stand a fair chance, the Koenigsegg received a handicap which means that it drove two laps of the Knutstorp race track in southern Sweden, whereas the Volvo FH tractor unit only drove one lap. Despite this, the conclusion is still unpredictable. The purpose of the race is to put the new Volvo I-Shift Dual Clutch gearbox to the ultimate test.

“I-Shift Dual Clutch has a dual-clutch, which is quite unique in the heavy vehicles market. However, similar technology is already in sports cars. Therefore, this was the perfect challenge,” said Jeff Bird, Press Test Director at Volvo Trucks. The similarities between the Volvo FH truck with I-Shift Dual Clutch and sports cars include includes a driveability that comes with seamless gear shifting and this is no more evident than at this circuit, which is known for its hilly terrain and demanding turns.

“It may sound like a different environment for a heavy truck, but the fact is that – thanks to its dual-clutch – I-Shift Dual Clutch is most useful in conditions that require a lot of shifting. The gearbox’s seamless shifts improve driveability tremendously,” said Jeff Bird.

Behind the steering wheel of the Volvo FH is the experienced motor racing personality Tiff Needell. Without revealing the results, Tiff – who had never raced in a truck before – admits that he was impressed by the performance of the vehicle.

“I-Shift Dual Clutch is absolutely incredible. It is particularly noticeable on slopes, the truck does not hold back – it just flows smoothly, without the gear changes being felt. When you brake, it switches down very softly and comfortably. The truck definitely has the heart of a sports car,” says Tiff Needell. 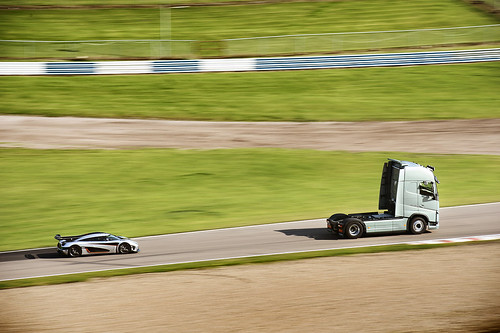