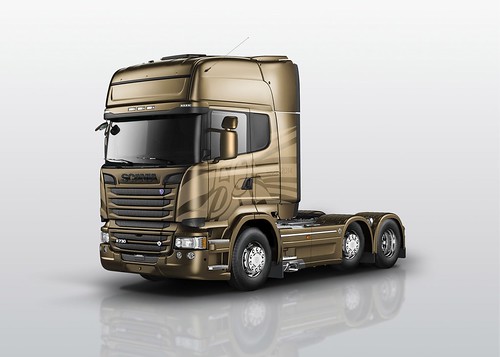 A small boy by the name of Charlie once sang;

Looking at the photos from the Scania GB press release I’m beginning to wish that I was Charlie Bucket, bugger Wonka’s chocolate factory tour, I’d be straight round to the loading bays and be straight into one of these awesome special edition V8’s. When a press release like this come along, its pretty difficult to summarise everything in a different way, other than what Scania’s experts have come up with, so I’m not going to bother, I’m a huge fan of copy and paste, I think its very underestimated;

“Each of these vehicles will be instantly recognisable by their striking gold livery, which has been designed by Scania’s in-house team of stylists and is available in two formats depending upon livery requirements (see accompanying images).

Available only with Scania R-series Streamline Topline cabs, each model in the range will carry a plaque bearing its unique Limited Edition number. The choice of available engine outputs will be 580 or 730 hp, although model numbers 1 and 50 in the range will both be equipped with Scania’s 730hp power unit.

All vehicles in this Limited Edition can be specified in 4×2, 6×2, 6×2/2, 6×2/4 and 6×4 (for STGO Category 1 and 2) wheelplan format, and Scania’s luxury Griffin pack will be fitted as standard. In addition, each vehicle will be equipped with a wide array of home comforts ranging from a kitchenette to a TV/DVD player, plus three luxury Scania packages – Black Leather V8, Prestige and Driver – thereby assuring the owner and driver the ultimate in terms of specification, comfort and safety.

A wide range of active and passive safety features, including Lane Departure Warning, Adaptive Cruise Control and Advanced Emergency Braking will also all be fitted, and each truck will feature a state-of-the-art entertainment system.

“Not since the Scania Centurion range, which was produced in 1991 to mark Scania’s centenary, have we developed such an exclusive offering as this Limited Edition range of gold 50th Anniversary Trucks,” says Scania (Great Britain) Limited’s UK Truck Sales Director, Martin Hay. “I am confident that as with the Centurions demand will be exceptionally high, so the advice to anyone looking to secure one of these unique vehicles has to be contact your dealer right away in order to avoid disappointment.”

Martin Hay of Scania GB mentions the Centurion range but for me there is one huge difference that makes the Golden Griffin better than the Centurion’s. The Golden Griffins are limited in their spec. You could have ordered a Centurion as a 113 360hp with a flat top and the old flat front grill, but in my opinion and I know many others agree, they should have all been 143’s with the newly released (at the time) Streamline cab. The Golden Griffin for me is as a special edition should be, it can only be ordered as a 580hp or 730hp V8, I even like the fact that editions 1 and 50 will only be 730’s! It will only be available with one cab choice, the Topline Streamline. It is also only available in one colour, Gold. All I hope is that these 50 trucks are looked after far better and that records are kept of their where abouts. I’ve been trying to piece together an updated list of the 100 original Centurions but its proving almost impossible. Scania GB have surpassed themselves so far with the Golden Griffin, so I hope that records are kept and these 50 golden trucks are still traceable in 22 years time unlike the Centurions.